How To Clean And Unclog The Catalytic Converter In Your Car

What Is The Catalytic Converter?

Simply put, the catalytic converter is an exhaust emission control device. It works by converting or combining carbon monoxide and unburned hydrocarbons with oxygen. As the untreated smoke enters the catalyst, the pollutants are converted into carbon dioxide (CO2) and water. This is the reason why a vehicle with a broken, burned out, or malfunctioning catalytic converter is illegal to drive since the car will be more polluting to the environment.

Read more:  The Best Aftermarket Catalytic Converters For Your Car.

Can You Really Clean Or Unclog An Old Catalytic Converter? Here’s the truth: the catalytic converter is a non-serviceable component. It is designed to last the life of the vehicle. However, premature damage may result from shock, bumps, or engine problems. For example, an engine that burns oil or coolant due to faulty head gaskets will incessantly burn the oil inside the motor. Eventually, the burned-out crud will make its way into the catalyst, hence causing clogs or excessive carbon buildup. This alone will significantly reduce the efficiency of the catalytic converter.

But when this happens, can you actually clean or unclog the catalytic converter? In our many years of experience working with cars, we usually replace the catalyst if something goes wrong. But since a new unit will cost many hundreds or thousands of dollars, some people resort to other measures to unclog the catalyst.

And in some cases, it works! But if the catalyst is burnt out, no amount of cleaning will restore the efficiency of the converter. That’s how it is.

How Will I Know If The Catalytic Converter Is Malfunctioning?

This is the hard part. Since the catalytic converter is resting under the vehicle, you’ll need to raise the vehicle and remove the unit from the exhaust pipe. But if you have a scan tool and you know how to use it, you can easily rule out a catalyst failure by interpreting the live OBD2 data.

With that being said, the first symptom is an illuminated MIL or malfunction indicator lamp. In other words, it’s the check engine lamp, which is usually accompanied by fault codes stored in the vehicle’s CPU. When this happens, you’ll need an OBD2 scan tool to determine the source and meaning of the fault code.

Of course, there’s also the option of removing the catalytic converter and breaking it apart to see if the catalyst is burned out, but this is illegal and takes a lot of work to accomplish.

How To Clean And Unclog The Catalytic Converter

Before we proceed, a word of warning: there’s no guarantee the converter will start working again after cleaning or unclogging. Better not get your hopes up. But in the absence of other problems or faults, unclogging a dirty catalytic converter may get rid of the check engine light in your vehicle.

There are many ways to clean the catalytic converter. Let’s discuss the most common methods. 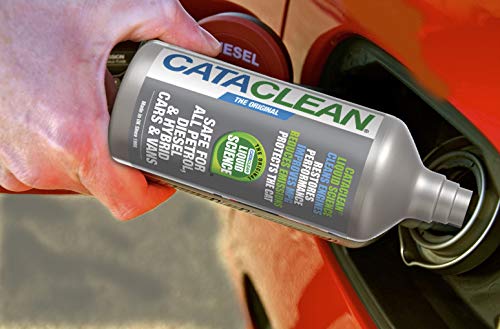 Depending on the vehicle type, there are times when it is impractical to unbolt the catalyst from the exhaust system. This also holds true for vehicles equipped with turbochargers or forced-induction. If this is the case, you can try cleaning the catalytic converter using a specialized cleaning product.

Method 1: There many products you can use. But we found two that are better than the rest. You can try Oxicat to restore and clean oxygen sensors and the catalytic converter. Oxicat is designed for gasoline and diesel engines. Simply pour the entire contents into a full tank of gas and drive your vehicle normally. In order to achieve the best results, you should drive at higher engine speeds. Oxicat will only work if the catalytic converter is hot enough to literally burn off the contaminants. You can expect better results after two or more treatments of Oxicat.

We also like the Run-Rite Sledgehammer Decarbonizing Kit. This kit not only cleans the catalytic converter, but it also removes performance-robbing deposits from the valves, injectors, and combustion chambers inside the engine. This kit consists of two bottles. The first is a fuel system treatment that you pour inside the gas tank. The next is a rapid-induction deposit cleaner to remove excess carbon and soot.

Method 2: This may sound crazy, but you can reinvigorate an ailing catalytic converter by using lacquer thinner. This method involves pouring a gallon of lacquer thinner into the gas tank, preferably with a half tank of gasoline. Start the engine and raise the engine speed to 2,500 rpm for about 30 minutes. As an alternative, you can drive the vehicle normally, but you should find an empty highway so you can drive at higher speeds more consistently. The trick is to allow the catalytic converter to reach its maximum operating temperature so it can burn off the contaminants. Step 1: Mix 2 tablespoons of dish soap and water in a large plastic bucket. The cleaning solution should be foamy and rich.

Step 2: Dip the catalytic converter in the bucket and allow to soak for 30 minutes to 1 hour.

Step 3: After soaking, remove the unit from the bucket and rinse off the excess soap with clean water.

Step 5: Bolt the catalytic converter in the stock location and start the engine.